Enjoy these high-quality and extremely erotic videos of men taking shower and getting completely naked. Young muscle guy in shower The first one is made in spy cam theme. Handsome young muscled guy enters into shower room and takes off his towel, but you can see only his perfectly ripped body at first. The he takes a soup and starts and applies it to his muscled belly with his well-trained arms. He also soaps his shoulders and chest and you can see his sexy trimmed armpits.  Then he also massages his nipples. Then camera turns on his dicks area and you get totally captivated by his soft cit dick, big balls and shortly trimmed pubes. While he continues to soap his body he turns and massages his wet butt.

Stunning muscle man showering. The next video also starts in a gay voyeur theme. You can muscled med from behind through the grass first ass he massages his smooth powerful legs then he comes to the shower and turn it on, being still in his white trunks and gets wet. You will enjoy his perfectly trained body and beautiful face as water covers him and he massages himself with sexy erotic movements, sending some smiles. Then he takes off his trunks and can see his beautiful soft cock and well-shaved pubis with only a a line of trimmed hairs rising up to the navel. He soaps his dick and robs it and then soaps his hot body too.

Showering together with other naked men in one shower room

There sometimes arise debates and discussions around guys showering together theme. In the gym there is usually a large shower room without cabins with several shower heads or with open cabins often by the side of the room so you can spy for other naked guys showering in the opposite cabins. Though some guys do not take off briefs but most strip down taking off all the clothes and showering naked without problems.

Feeling uncomfortable with other naked men?

It all depends on how you grew up, if you for example were an only child in the family or grew up in an isolated area where you did not had many friends to bond with so then you will prefer to be private when using bath or showers.

Another reason is that some guys do not like to shower with their friends as they would be talking about everyone’s penis during several years just for a joke everywhere around and it would be strange. But showering with strangers and unknown guys at the gym when doing high school sports or elsewhere is ok in this case.

Lots of guys when studied in the high school and were required to shower with other naked boys hated it as they felt uncomfortable and that lasted for a long time.

But one must keep in mind that there is a big difference between being nude and having sex and only for the reason nude men shower together it does not suppose that you are gay. But it does not mean you won’t like to spy hidden for naked males washing.

Other guys feel quite comfortable showering together with other boys or being naked together on other occasions like living in one place or when growing up in a big family with lots of brothers. Sometimes brothers or specially twins have in habit to go to one bathroom together or even sleep in one bed naked.

So, sometimes some can ask a question if it is normal for guys to take shower in a one shower room, which is when there are no cabins. The answer is it much depends on how you grew up. If you were an only child in the family and grew up isolated from other guys and got not many friends you can feel strange to shower in one big shower room with other men. Or you will prefer to shower with strangers then your friends.

For those who like to spy for naked men showering together is the perfect chance. However it is not possible to stare at others as you can get problems, so usually you got just a few seconds to glance at others naked guys. 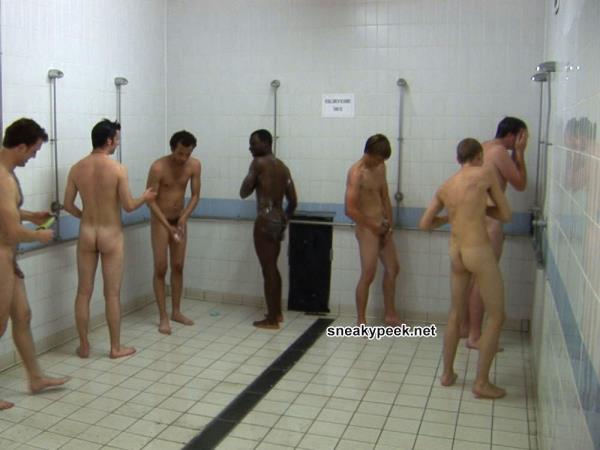 In my collection there are lots of gay voyeur movies with guys showering and I can enjoy these vids as long as possible. Why don’t you have them also?

Oh my,  have you seen this spy cam  clip at  with men locker room and where then this black sportsman enters? He got so huge cock, first it is soft but already big and then it suddenly becomes erected! 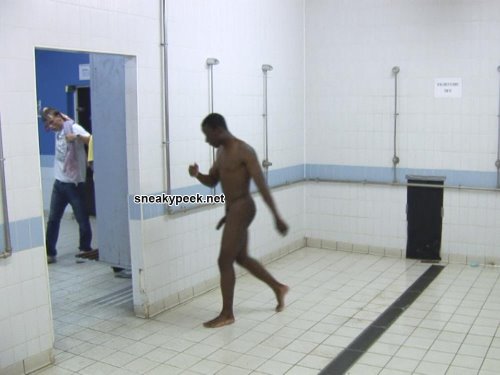 He also stretches when he dries himself with a towel and you can see what a great ass he has!

Don’t wait go to HERE to buy a membership!